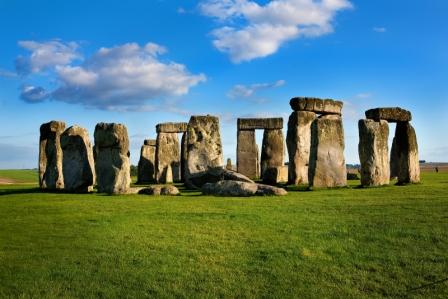 Airport Pickups London offers private tours to Stonehenge & Bath 365 days a year. Guests can easily book their tour through our user friendly booking engine. You can book your private tour from any London address to the selected location for the same price.

The immensely significant site, Europe’s most famous prehistoric wonder, stands at the core of ceremonial landscape containing 450 protected ancient monuments of national importance. Stonehenge retains a powerful atmosphere of mystery and a awe because very little is known about the site.  Was it a temple or a huge astronomical calendar? Why did people  build it and how was this great engineering feat achieved?

What you see are the remains of sequence of monuments erected in three phases between around 3050BC to around 1600BC. The outer circular bank and ditch are oldest parts, probably constructed over 5000 years ago. About 475 years later a double circle of 80 bluestones (so called because of their natural color) was erected. These stones weight up to four tonnes each and were brought more than 200 miles (320 km) from the Preseli Hills in southwest Wales.

The city is built from eye-pleasing, honey-colored limestones, and has a striking setting amid seven hills, where the Cotswolds meet the Mendip Hills, and on the banks of the River Avon and the Kennet Avon Canal. The hill can make walking tiring, but you are compensated by the wonderful views. With more than 20 museums and historic sites, a huge choice of accommodation and plenty of specialists shops-including a daily antiques market in Bartlett Street- there is definitely something for everyone. In between sightseeing, you can take in vibrant street life, from any number of cafés in the form of street entertainment.  If you are based in London, Bath makes a great day out.

Roman Bath was founded in AD44 as the settlement of Aquae Sulis, Bath prospered trough the wool trade in mediaeval times, but its modern importance dates from the 18th century, after its Roman hot spring were rediscovered in 1755. They were made fashionable by the dandy Richard “Beau” Nash (1674-1762), who was paramount in attracting London’s high society to the baths and springs, as well as to the grand balls and assemblies. Today Bath is the country’s only hot spring.

The high-ceilinged, chandelier-lit Georgian Pump Room (1796) is a great Bath institution, where a chamber trio provides accompaniment to afternoon tea within sight of the King’s bath. This room was originally built serious purpose. A group of doctors, led by William Oliver (inventor of Bath Oliver biscuit), felt that invalids should be able to come together to drink Bath’s mineral waters.  But Richard ‘Beau’ Nash, the cities master of ceremonies had greater ambitions. Realising that ‘a Pump Room could be useful as a meeting place, he hired musicians to play and fashionable visitors flocked in.

From the genteel elegance of the Georgian Pump Room you suddenly walk in to Roman times in the finest bathhouse site in Britain.  A self-guiding tour leads past displays of finds from the site down to the waters. The highlights of the visit are the pool and the Roman Bath (the Great Bath). The spring, still bubbling up at a constant 46°C (116°F), was sacred to the goddess Sulis, who was thought tp possess curative powers. The Romans made bathed and made offerings.

Not in fact an abbey but a church, this building (begun in 1499) represents one of the crowning examples of the Perpendicular   style.  Legend has it that the shape of the church was dictated to its founder, Bishop Oliver King, in a dream by angels.  This story is immortalized on the west front, which shows the carved angels ascending and descending on ladders, and the founder’s  signature-a carving of olive trees surrounded by crowns.